Written by Danny Soto
Comments Off on Tradition and departure: women artists in Latvia

With Eastern Europe daily in the news a visit to the Latvian State Academy of Art in Riga promised to be interesting. The purpose of the journey was to finalise details of an exchange of staff and students between the Academy and the School of Art and Design at Sunderland Polytechnic, but the knowledge that women artists were prominent in Latvia added to my sense of anticipation.

I soon found that the ascendancy of women artists was not reflected in the teaching staff in the Academy. The majority of the small number of female members of staff are in the departments of art history, languages and textiles. There are no women professors or heads of department–the two are not synonymous–and the textile department demonstrates exactly the kind of situation we have been resisting in the UK. All the staff are female except the head of department. In the departments of painting and sculpture there are no women staff, yet female students account for at least half the annual intake to all departments of about fifty students. The most exciting work from students is emerging from departments such as textiles and printmaking rather than painting and sculpture, and this is also reflected in art practice in Latvia generally. This may be due at least in part to the existence of a strong indigenous tradition particularly in textiles, so that isolation from the West did not constitute deprivation of the motivation to question and explore. This traditon was able to continue untouched by pre-perestroika ideological constraints. The result is a thriving and diverse textile art in which the majority of practitioners are women. The existence of textiles as an option equal to other media is something which should be further encouraged in art education in this country. 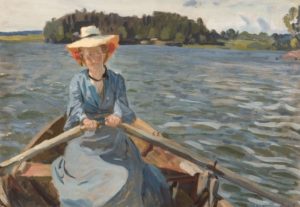 The Academy teaching in painting and sculpture is more formal than is customary here at degree level and it only when students reach their fifth and sixth years that more self-initiated work occurs. The reasons for the conservatism of these media are different. Over the past decades in the USSR sculpture in particular has been the servant of monuments of social realism. In addition to the ubiquitous busts and statues of heroes of the state, there are many memorials to wars and revolutions, such as that of Salaspils (1967) and the Freedom Monument (1935). Latvian painting, particuarly in oils which is more rigidlly separated from watercolour than is the case here, lacks direction. Less involved in social realism, at least judging by the examples I saw, it has not found a role of its own. It suffers from a partial and indirect acquaintance with early Modernism, usually Parisian. Books on modern and Modernist Western art are sparse and since travel was impossible, much of Latvian art has reworked styles based on artists such as Matisse and Dufy. To the Western eye much of it looks tired and deja vu.

If the Academy is run by men, the National Museum of Fine Arts is run by women. The Director General of the Association of Latvian Art Museum is Ilze Konstante, and several of the curators are also women. Whether by coincidence or not, there are more works by women from the permanent collection on show at the Museum than at the Tate Gallery, which persists in keeping its works by women in store. Of the sculptors, one of the most renowned of the older generation is Lea Davidova-Medene (1921-86) whose figurative work possesses that Slav quality, more familiar to us in the works of Mestrovic, of accentuating the angularity of planes of the head or figure. Primarily a portraitist, she was awarded the’ title of Merited Artist of the LSSR in 1966. Other women sculptors of that generation represented in the Museum include Aleksandra Briede (1901-68) and Marta Lange (1903-85). Women painters born in the 1920’s are well represented and the most interesting work comes from the hand of Djemma Skulme (b. 1925). The daughter of two artists, she is now the leader of the Latvian Artists’ Union. Her semi-abstract works show figures in tones of grey, black and white occupying one part of the canvas, with broad rivers of saturated colour sweeping down vertically over some of the figures and background. The work of several women, all over forty, is exhibited in the graphic art section. One of these, Lolita Zikmane (b. 1941), is represented by some of her subtle tonal etchings. Her subjects centre on the relationship of people with nature and, more recently, with each other. She is also known for her poster productions for causes such as International Women’s Day and conservation, now a more pressing issue since the revelations about the pollution of the Baltic Sea and Riga Bay. She has enjoyed a series of solo shows–a rare occurence for Soviet artists–since 1972 and is the recipient of many prizes.

Although not represented in the Museum, Aija Zarina is another of the better known women painters in the Republic. Like Skulme she has an original style. Zarina’s paintings contain bold simplified forms of people, sometimes with animals, outlined with a confident bold black line. The colours are mostly flat and always brilliant. The background consists of further areas of flat colour so the spectator is given no sense of depth, no context for the forms. Despite this the paintings are no mere formal exercises. The female figures are used to explore situations and relationships, sometimes allegorically, but never adopting stereotypical formulae. Her work would arouse considerable interest if shown here. 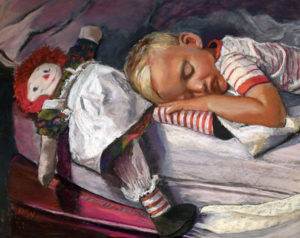 There are numerous women watercolour painters, although few are represented at the museum. The catalogue of a 1989 exhibition of watercolour painters from the three Baltic states included 222 artists of whom fifty were women and half of these were Latvian. The freedom of handling so remarkable in the oils of Djemma Skulme is much more evident in watercolour, notably in the work of Inte Berente (b. 1960), Benita Apine (b. 1929), Vija Krasta (b. 1950) and Gunta Liepina-Griva (b. 1942).

Watercolour is second only to textiles in terms of its vitality. A visit to the open-air Ethnographical Museum, just outside Riga, provided clear evidence of the wealth of the tradition which today’s artists have inherited. Generations of geometrically patterned textiles produced for domestic use and for clothing have not constrained contemporary artists. Parallel with the ongoing production of such textiles is another which achieves a great variety of effects through technique, material and colour. Much of the work is tapestry, the principal technique taught at the Academy, which almost all the artists attended, but there are also painted textiles, and techniques evolved by individuals. There is little applique or patchwork. Some artists, such as Dina Stempa (b. 1952), use tapestry as they would paint, although the process is a great deal slower, while others exploit the ability of textiles to create three dimensions. Flaps, ridges, and a variety of threads are used to create tactile pieces. Lija Rage (b. 1948) places objects covered with textiles in front of a two-dimensional wall hanging, achieving contact with the spectator’s space. She is developing her work away from tapestry to the invention of her own techniques with non-traditional materials. Of the artists involved in producing works which we might term sculptural textiles, Dzintra Vilka has evolved during the 1980s from tapestry to her own techniques. Jumis, the fertility symbol consists of a wooden frame in the form of an inverted V covered with a cream fabric woven to resemble long fur. Into this, particuarly at the top, have been inserted fabric objects resembling ears of corn, corn dollies, (a traditional fertility symbol in England), and straw plaits. Emilija Kazakevicute (b. 1949) uses knotting to create semi-geometrical hangings, while Vija Jansone uses braiding, employing an openwork background against which she places subjects from peasant life, all executed in subtle tones of ochres, browns and creams.

As contacts with Western Europe increase, it is to be hoped that the vitality of the textile and much of the watercolour work can be retained. For other media the process of finding an authoritative and genuine voice may take longer, and the contribution of women artists will be important. They would be better able to assist if they were able to act directly as role models to students in the Academy. 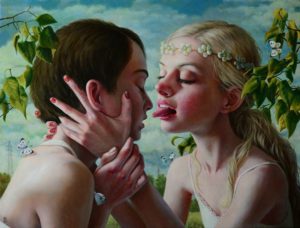