At present, it is impossible to predict the impact digital technology will have on art. It is, after all, still in its infancy in terms of accessibility and scope. Nonetheless, artists such as Alan Dunning and Sheila Urbanoski have already been persuaded to abandon traditional media for the delights of cyberspace. It seems inconceivable that object-oriented art will ever completely disappear. But if future generations of artists wish to avoid being regarded as anachronistic, they must surely find a way, as Reginald Hamilton has done in his recent exhibition of paintings entitled “Windows and Mirrors,” to integrate digital technology into their practice.

The show is inspired by a six-month work term Hamilton undertook last summer at a transnational corporation whose head office is located in Regina. Having spent three years in the heritage-rich city of Edinburgh, where he obtained his MFA in 1993 from the oldest established art school in Europe (the Edinburgh College of Art, founded in 1707), Hamilton was instantly struck by the slick modernist sheen of his work environment. Using a digital camera, he began to dissect this environment, taking close-up photographs of elevator doors, escalators, perforated side panels of pay phones and roll-down security shutters.

For the most part, these objects are made of burnished metal. But because the digital camera doesn’t require a flash, he was able to photograph them at close range without glare. He then edited the images on television, taking advantage of the technology’s tile and zoom functions to compare the relative merits of each picture. Once the selection process was complete, the images were transferred to a computer, where he used various software programs to manipulate them – primarily through cropping, but also by adjusting their brightness, contrast and duplicating sections and reversing them to create symmetrical compositions.

In replicating the digital images in paint, Hamilton confined himself to a palette of white, black and Payne’s grey. Although he did use linseed oil to thin the oil paint, so that as the works dry, they acquire a greenish-yellow tinge reminiscent of sterile fluorescent light. Easily the most minimalistic paintings he has yet produced, the works capture the inherent blandness of the corporate environment, where conformity is not only encouraged, but expected, and any deviation from the norm is rejected for fear it will impair efficiency. Yet the works are not without seductive appeal, reflecting the desire people have in this age of economic uncertainty to seek employment with powerful organizations that offer them the promise of status and security. Employees might chafe at restrictions imposed on them in terms of dress and comportment, but rarely does their resistance go beyond such “subversive” acts as posting a particularly trenchant Dilbert cartoon on their cubicle wall. By dramatizing the imperious nature of the modern office environment, Hamilton identifies one of the main mechanisms through which corporate management imposes its authority.

Through the exhibition title, Hamilton alludes to two long-standing metaphorical traditions in painting. The first, which is grounded in realism, has its origins in the Renaissance notion of a painting being a window through which viewers could experience a two-dimensional version of reality. This illusionary practice continued until the late nineteenth century, when Cezanne and his contemporaries began to dispense with perspective and fracture the picture plane. The mirror, in contrast, is strongly associated with abstract painting, in that the non-objective quality of the work permits viewers to construct their own narrative content and meaning. Because of its self-referentiality, this interpretive process inevitably reflects each viewer’s unique physical and psychological state.

This duality is further expressed in Hamilton’s deliberate equivocation between the aesthetic poles of figuration and abstraction. As noted above, these works are based on digital photographs of corporate architecture. Yet because of the extreme decontextualization they have undergone, they contain little recognizable detail. The dominant feature of his elevator door paintings such as Download and Terminator (both 1998), for example, is a thick vertical line. To this reviewer, the works recall the sparse landscapes of Otto Rogers, who tended to emphasize (precisely because of their scarcity) the rare vertical elements like trees and telephone poles that exist on the prairies. Hamilton compounds his mischief by using a square format for some of his paintings. Within the context of representational art, landscapes are traditionally horizontal, while portraits are vertical. As an ideal Platonic form, in contrast, the square has been used by abstract artists since the genre’s inception to express the notion of aesthetic purity.

While intrigued by digital technology, Hamilton still appreciates the physicality of paint. Admittedly, this appreciation is more muted here than in previous bodies of work, where he attacked the canvas with more vigour. But through his meticulous application of dilute layers of oil paint, he has managed to introduce subtle tonal and textural effects that differentiate his work from its digital referent.

I suppose it is not beyond the realm of possibility that someone intimately familiar with corporate culture, and comfortable with bureaucracy in all its guises, could be soothed by these paintings. Most people, I suspect, would find them disturbing. The elevator images, in particular, possess a strong sense of foreboding. Standing in front of them, one is inevitably reminded of the tension one experiences in a high-rise office building at the prospect of using an elevator, and being forced to share one’s personal space with an ever-changing coterie of strangers.

With their dull reflective surfaces, the doors and the other objects depicted by Hamilton, in situ, do function like mirrors, albeit offering murky reflections of the employees and customers who interact with them. Not quite invisible, as in the case of a careless vampire caught standing in front of a regular mirror, these unfortunate souls appear instead to be on the verge of being subsumed by the corporate ethos that surrounds them. Through the austerity of his images, Hamilton does a solid job of capturing the environment in which this ideological struggle between personal and corporate identities occurs. 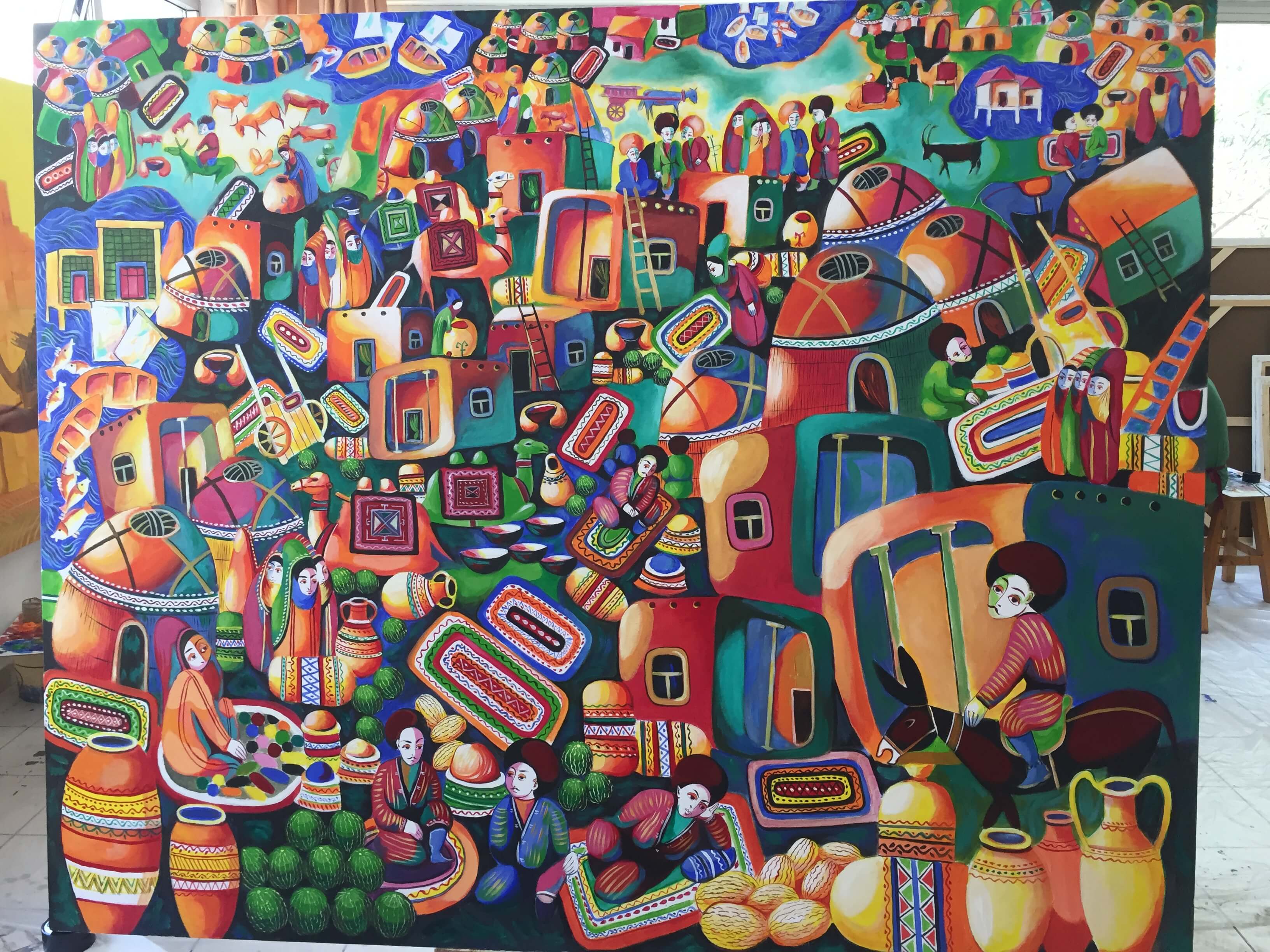 You can have a look at canvas oil paintings video, If you like wall art.